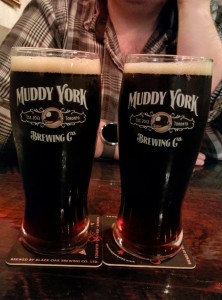 Toronto’s East End has been buzzing for a couple of weeks about the new kid on the block, Muddy York Brewing Co. And they blew up our Twitter feed during their recent launch party.

@MYBrewingCo is the talk of East York today. OH 2 conversations about it today! Guess it was a good launch! Cant wait to try the porter.

Founder Jeff Manol has one of the top two most dapper moustaches featured on this blog thus far, congratulations. This husband and wife team founded their brewery in 2013 in Toronto’s East End. The brewery is named after the old town of York, originally founded in 1793 on what is now Toronto. This succulent dust pit would run muddy during the heavy rains Toronto is known for. This is our second husband and wife team featured on the website this week. I guess it’s almost a salute to Valentine’s Day? Couples who brew together, stay together?

For their debut launch, Muddy York has come up with a 4.5% ABV porter, a popular style of the era. For now, Muddy York is only available in 2 bars on opposite sides of the city, The Mugshot Tavern and The Wren. We specifically ventured to The Wren to try it out a few pints on tap with dinner on the weekend before lucking out and further sampling the Unearthed Amber Ale at The Only Cafe’s Winter Beer Fest. We salute Muddy York for launching with a porter as opposed to the more popular IPA style. We particularly liked the glassware, guys. 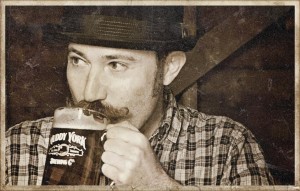 Aroma: Smoky and nutty aroma. Possibly a hint of marshmallow? Pecan?
Taste: Smooth flavour with a pronounced roasted nut flavour. Nice warm flavour for a cold February day. Taste develops into a maltier profile the more you drink it and the more the pint glass warms up.

Overall: Bold flavour and bold choice for a new brewery. Worth the Twitter hype. Try to get yourself a glass while supplies last. We wish you all the best, cheers!