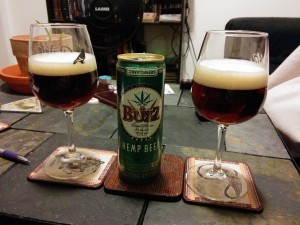 It felt really weird having Millenium Buzz Hemp Beer anywhere else but Sneaky Dee‘s, and yet I found myself drawn to its discount pricing at the LCBO recently. In memory of a friend’s recent passing and his supreme love of low-cost beers, I picked up a can in his memory. It’s been damn cold out, but I tried to envision myself sipping this on the tiny patio or in one of the booths. It didn’t work.

Craft beer, this is not. But I thought I’d give it a try anyhow, since Cool Beer Brewing Company is actually the contract brewery for many smaller brewers in the Toronto area, including Duggan’s, Spearhead and Hogtown. Based in Etobicoke, and for only $1.65 at the LCBO for a 355 ml slim can, it would do the trick. We tried it in white wine glasses to try to really bring out the flavour. We failed. Apparently it works for some people, cause it has won some brewing awards including the Canadian Brewing Awards Gold Medal for North American Style Amber Lager

I remember hemp beers being a bit of a gimmick about 10-12 years ago from Brasserie Le Chaudron International in Montreal. That brewery folded in 2007, and it was probably the last time I had a hemp beer outside of the confines of Sneaky Dee’s. In fact, I’m not always sure what I order at Sneaky Dee’s, but I usually ask for a jug of their finest swill. Something cheap and red is usually brought to the table.

Hemp beer contains none of the psychoactive chemicals of marijuana. Hemp does not replace the other malts in the mash; rather it is added to the brewing process. I find that regular hops can sometimes smell like a dank bag of pot, and on a decent hemp beer, it adds an extra layer of flavour and bitterness if it’s done right.

But this one is not super exciting. It is, however, a perfectly cromulent beer. Bonus points for having the same name as the brew on the Drew Carey Show, although that brew was a concoction of beer and coffee. Wait, that sounds like something Kole would like…

Appearance: Rich creamy head, nice dark amber colour.
Aroma: A very light aroma, smells like unidentifiable beer. Nothing really stands out from the hops or malts.
Taste: A hint of spiciness, a hint of flavour. I find it dull.
Aftertaste: None to speak of.
Overall: I won’t be seeking this out again at the LCBO, but I may order another jug of Sneaky Dee’s cheapest swill the next time I’m there. I’m over the age of 30 though – so it might be a long while. A cromulent effort. We prefer the contract offerings that come out of this building.