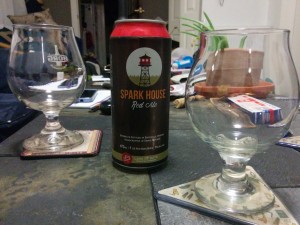 With a homemade pizza in the oven and a half hour to kill until dinner, I went hunting for treasure in our beer fridge (yes, we have a beer fridge in the living room). I found a tall can of Spark House Red Ale by Lake of Bays Brewing Company and split that between two balloon glasses for optimal tasting. Available from the LCBO at $13.25 for a 6 pack, or $2.75 for a tall can, this is a rare Ontario red ale. This particular bad boy is an Irish style red ale that Quebec craft brewers have been widely offering for years, but it’s a style that has not quite picked up speed in hop-heavy Ontario. We split a tall boy at home between two balloon glasses to optimize the aromas. 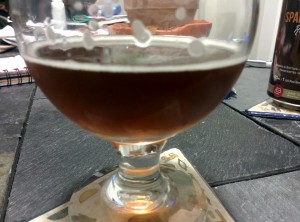 Appearance: Rich ruby colour throughout. A deep amber offering, a good representation of the red ale genre while pouring. Thin head. Opaque in a glass.

Aroma: A nutty aroma with hints of honey. Hints of floral hops.

Taste: This one had a dry mouth feel with hops at the back of the mouth. Evenly carbonated throughout. Refreshing and cold. It would pair nicely with red meats, hanging out in front of the campfire, or pizza. Is that pizza ready yet? Nice hint of sweetness from the malt.

Overall: I’m a huge fan of red ales, and they are not as common in Ontario as I would like. It’s a solid red option and a great alternative to the mass produced Rickard’s Red, but there aren’t a lot of local options (yet) to compare it with. I’ve bought it before, and I’m sure I’ll buy it again when I need a break from hoppier beers. Definitely not for the mild pilsner drinkers out there.