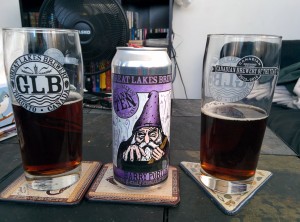 Harry Porter is one of those seasonal beers that changes from year to year. Great Lakes Brewery made a brilliant version last year, called Harry Porter and the Bourbon Soaked Vanilla Bean. It was glorious, and popped up periodically on cask. It was like a party in my mouth. In fact, it was some of their best work.

This year they scaled back the release a bit, releasing Harry Porter as their Tank Ten seasonal release in cans and on tap at finer purveyors of suds around the city. The Tank Ten series is basically a tickle trunk of neat-o beers, carte blanche for the brewers to run wild with scissors and experiment.

I’ve tried the most recent incarnation on tap a few times this season (I order it for sheer yummy factor – I’m not a fan of the Harry Potter books) but this was my first time trying it in can. Canning is all the rage this year with breweries – the beer stays fresher longer when no light can oxidize the precious contents. No one likes a skunky beer.

Kole managed to win 2 pint glasses from Great Lakes Brewery in a Twitter giveaway, but we had to make the journey to Etobicoke to collect our prize. Since we’re all about romance here at Toronto Booze Hound, we bundled ourselves up to our eyeballs and made the long TTC journey to the brewery on Valentine’s Day. Romantic, I know. But there were some glasses urging us on, and we did stop for a tasty Australian pie snack at the Pie Commission. We picked up some treats to test out our new glasses and a jar of GLB mustard. What a romantic day.

The can is clearly not for LCBO distribution. It’s a sticker on a 473 ml tall can of 6.5% dark beer with snappy packaging. 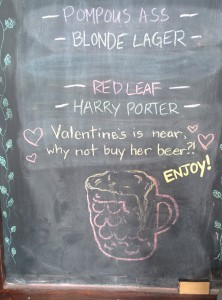 Appearance: Medium brown filtered appearance with minimal head from the can. Tap pours usually have a thick, creamy head (that’s what she said).
Aroma: Slight vanilla notes, but nothing like the Bourbon Soaked Vanilla Bean incarnation. Bring that one back, boys.
Taste: Rich, dark malts with more vanilla. Smooth on the palate with nutty flavours running through the toasted malts.
Aftertaste: Mild vanilla aftertaste.
Overall: A lovely option. I should stop being nostalgic for a beer that came before, and enjoy what I have in front of me now. Order a pint if you see it on tap, while supplies last.