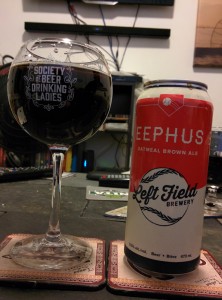 Left Field Brewery is now operating out of their shiny new brewery in Leslieville, currently offering a rotation of tap beers and take out cans during their weekend pop-up shops. We ended up at the brewery for our second visit recently after a sloppy afternoon at the Brewer’s Backyard at the Brickworks. After an great afternoon drinking craft beer, we could think of nothing better than to have a few more brews with some new friends we made at the Brickworks.

Eephus Oatmeal Brown Ale is the flagship beer from Left Field, and it has been available since late 2013 as a contract beer on tap at finer beer bars around the city. We took home a 6-pack of this 5.5% ABV to do a proper tasting, since we were less than objective by the time we showed up at Left Field. Named for an obscure and rare baseball pitch, this brew is anything but obscure. Brewed the hard way in house, it is a refreshing option on an early spring day while watching the Blue Jays play. Or playoff hockey, if you’re me.