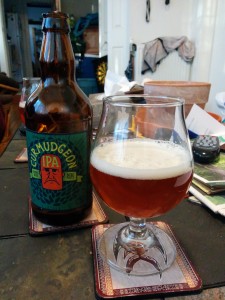 I came home from work in a bit of a surly mood on Wednesday (it happens) only to find Kole having an early evening nap with the dog. It seemed fitting to me to settle in with a beer called Curmudgeon IPA by Grand River Brewing out of Cambridge, ON, since I was apparently stomping around the house acting like a veritable curmudgeon. A 500 ml bottle will set you back $3.95 at the LCBO and will leave you feeling a smidge tipsy at 6.5% ABV.

Curmudgeon IPA is a seasonal offering by Grand River and the recipe changes from year to year. Some incarnations have been English style IPAs and other years an American style offering is available. The 2015 edition is an English style IPA, but your guess is as good as mine about what the 2016 incarnation will resemble. This bottle has been kicking around our beer fridge for at least a month, possibly 2. I think I picked it up on a day when Kole was acting like a curmudgeon, but we never got around to opening it.

Appearance: Rich red/amber colour. Filtered. Creamy white head, diminishing.
Aroma: Boozy aroma with a surprisingly malt forward profile for an IPA. Peppery hops aroma.
Taste: Malty flavour without much complexity. Celery notes from the hops, which is an off flavour. Could be attributed to the length of time this bottle has been sitting around our fridge, as beer is best fresh. Possibly fuggles hops were used?
Aftertaste: Sweeter finish with a metallic ending.
Overall: Not overly impressed with this year’s Curmudgeon, but I do blame myself for hoarding it for too long. Would work OK with an Indian-style curry to cut the heat.