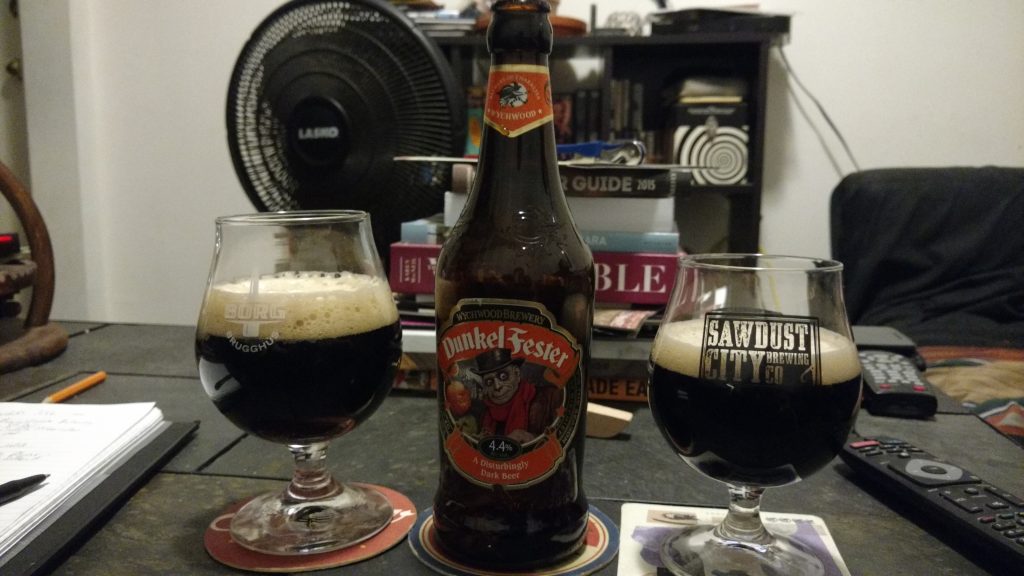 My favourite part about writing the 8 Beers of Chanukah series each year is the creative liberties I allow myself. Suddenly my beers can be from anywhere on the planet, and I have 8 days of exciting beer to play with. It’s my Chanukah present to myself. That, and I don’t necessarily have to share the brews either. What a glorious holiday!

Today’s brew hails from Witney, in Oxfordshire, UK. Dunkel Fester, a self-described “disturbingly dark beer” from Wychwood Brewery – not to be mistaken with the Wychwood Barns area in Toronto, like Kole was initially. I was lured in by the drawing of Uncle Fester on the bottle, and my affinity for dunkels at this festive time of year. This one goes well when you’re the one doing the cooking, since it clocks in at only 4.4% ABV. A 500 ml bottle will set you back a meagre $3.55 – that’s a steal of a deal for this smooth, malty lager! Make your uncle think you spent more on this Chanukah treat by telling him its an import.

Taste: Quite light bodied on the palate as an ode to the dunkel lager style. Fleeting glimpses of 70% cocoa dark chocolate.

Food pairing: Sufganiyah, the Channukah jelly donut of Eastern European origin. Fried deliciousness with jelly inside? Why not! Eat something!

Overall: Maybe more of a fitting choice for American Thanksgiving or Guy Fawkes Day. Whatever.  It’s my holiday, I’ll drink what I want.